Aneurysms are ballooning of a portion of the artery at a weak point, usually at the origin of a branch. Patients with aneurysms most commonly present with subarachnoid haemorrhage which means bleeding around the brain and is characterised by sudden onset of severe headaches, vomiting, decreased level of consciousness and occasionally with neurological deficit. Occasionally large aneurysms can press on adjacent structures and cause neurological deficits such as double vision, blindness and stroke.

A ruptured aneurysm is a serious condition. 1/3 of patients die and 1/3 develop severe neurological deficits. The risk of a second haemorrhage is high and is about 50% in the first 6 weeks. The diagnosis is made based on clinical symptoms and signs and confirmed by brain CT scan and occasionally lumbar puncture (Insertion of a small needle in the lower back to obtain cerebrospinal fluid). Patients will also require an angiogram (injection of contrast into the brain arteries via a catheter inserted into the main leg artery at the groin) to diagnose the aneurysm. 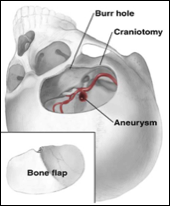 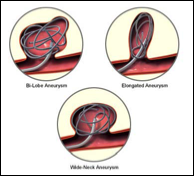 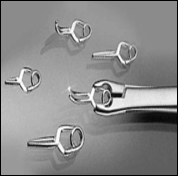 These are congenital vascular malformations characterised by thickened dilated arteries feeding a tangle of abnormal vessels (nidus) and draining into large veins. These are high flow shunts through which the blood drains from the arteries into veins bypassing the normal brain capillaries.

Patients present with intracranial haemorrhage (stroke), epilepsy, headaches and incidentally on brain scans for other conditions.

AVM are classified into different grades based on their size, location and the nature of draining veins. The diagnosis is confirmed by cerebral CT angiogram, MRI/MRA of the brain and formal cerebral angiogram.

The treatment options include observation with follow up scans, surgical excision via craniotomy and focused radiation (stereotactic radiosurgery). Your surgeon will discuss with you these options in detail and explain the pros and cons of each approach.